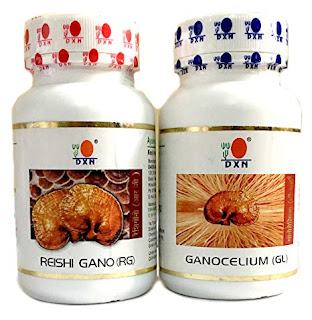 Felisa Gatchalian-Lalas of the Philippines, at age 61, lost her leg when it
was too late to discover that she had Diabetes. She was devastated and
felt no hope until she was introduced to DXN’s Ganoderma products. First
she took two pairs of RG/GL together with 3in1 coffee and Spica tea in
the first week. It was when she noticed she was gaining strength. She
increased the dosage by another two pairs the second week and kept it
for a month. Her husband used to piggy back her while going up and down
the stairs but eventually she was able to do the flight of stairs on her own.
People who knew her were astounded be her fast recovery. Even with a
prosthetic leg, and at her age, she is seen by her friends out and about
doing her errands. Her son, a medical doctor, was also surprised at her
recovery and advised her to keep doing what she was doing.

Maintaining blood sugar levels
Reishi was shown to be able to reduce the blood sugar levels significantly when taken orally as well as
evoke a 1 to 4 fold stimulation of insulin secretion from the pancreatic beta cells.

The pancreas is a versatile organ. It is involved in the production of many enzymes as well as hormones
that are necessary for digestion. The BETA CELLS of the pancreas are responsible for the production of
INSULIN, a hormone that usher glucose into the cells.

Three species of Reishi have demonstrated their ability to lower glucose levels in the blood as well as
increase the beta cells insulin secretion without causing any toxic effect to the various organs.

Increase insulin secretion
Reishi’s ability to lower blood sugar levels as well as increase insulin release from the pancreas was seen
to be due to the herb’s polysaccharides (or complex carbohydrates) that induces the influx of Calcium into
the pancreatic cells resulting in the release or secretion of the hormone Insulin.

It has been shown that the entry of Calcium into the BETA CELLS of the pancreas causes the release of
the hormone.

Pancreatic Beta Cells are protected from damages due to Diabetes
Reishi protects the pancreatic BETA CELLS from alloxan-induced damage that may result in Diabetes.

Alloxan is a toxic compound that is a by-product of bleaching flour and several proteins. It has been
strongly linked to the high incidence of Type 1 Diabetes due its ability to destroy the insulin-producing cells
of the pancreas.

Reishi protects the pancreatic beta cells from the free radicals produced by Alloxan by neutralizing them
with its anti-oxidant polysaccharides.

Clinical Studies on Type 2 Diabetics
A double-blind, randomized, multicentre study evaluated the efficacy and safety of the Polysaccharide
extract of Ganoderma lucidum in 71 patients confirmed with Type II Diabetes Mellitus. Half of the group
was given the Reishi extract and the other half received placebo for 12 weeks. After 12 weeks, all of them
were evaluated for the signs of change.

REISHI AND DIABETIC COMPLICATIONS
Prevention of Diabetic Kidney complications
Reishi prevents or delays the progression of the renal of kidney complications of diabetic mice. Reishi
was able to REDUCE the serum Creatinine and Blood Urea Nitrogen levels, two of the most common
tests for kidney functionality, as well as the blood glucose and triglycerides of Diabetic Mice.

Prevention of Eye and Nerve complications
Glucose in high levels in the blood stream is converted to SORBITOL by the enzyme Aldose reductase.
Sorbitol is a form of glucose that the body cannot use but that attracts a lot of water. Where ever it
accumulates, Sorbitol induces damage due cellular swelling.

In the eyes, Sorbitol results in cataracts and retinal damage. In other parts of the body, they cause nerve
damage as well blood flow obstruction.

Reishi BLOCKS the enzyme called Aldose reductase and prevents it from converting glucose into sorbitol
on the lens of the eyes of diabetic mice. Furthermore, this study also showed the Reishi inhibits the
accumulation of glucose and its by-product sorbitol in the lens, the red blood cells as wells as the sciatic
nerves of diabetic rats. These results suggested that Reishi might possess constituents with antidiabetic
and inhibitory effects on diabetic complications.