You are here: Home / Health - Self Help / What Is The Point Of Living If We Are Just Going To Die?
Spread the love

What Is The Point Of Living If We Are Just Going To Die? 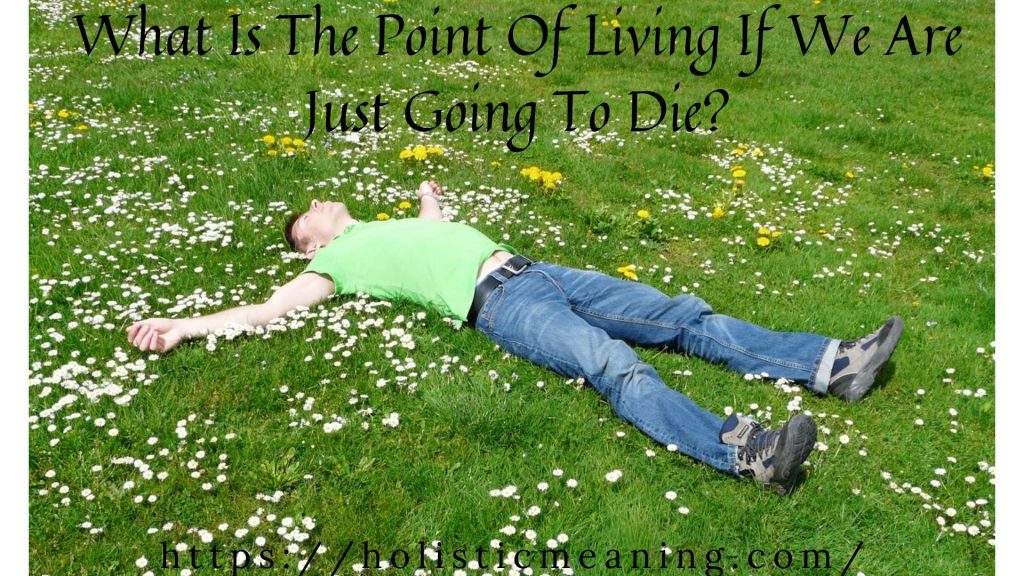 Asking about the meaning of life with a view that we will not exist after death or remember anything is neither logical nor based on facts.

Believe it or not, scientific evidence shows that we existed before this life and that we will exist even after the death of the body, apart from that we will remember everything, it exists and is completely true. It is only necessary to reach it, if it does not reach us first. I will help you a little bit.

What Is The Point Of Living If We Are Just Going To Die?

First, the nature of existence itself, by scientific evidence, can observe much more than the senses. Whatever our senses and mind experience as life and existence, it is only about 5% of what actually exists as nature. The remaining 95% is not viewable by us but still exists.

This percentage is not necessarily exactly the same at all times, but they certainly show an approximate relation to the reality of which we are aware and which are not aware. There is too much reality of existence that we are unaware of.

This pervasive reality, of which we do not know, is described by physics as a higher dimension, religion and mysticism, as the higher world, the “kingdom of heaven”. In any case, what we call “our life” is limited to this small percentage that we see through the senses and causes, and which we now know through the physical body. What we call “death” refers to the greater part of the existence of nature that we are not aware of but still exist. First let’s use logic.

Is there a possibility of non-presence in nature?

Nature is very rational and economical, it never wastes its energy in vain. When we look at all life and the universe and see how vast everything is, how much effort, creativity and energy have been invested in all this, it is not really logical to suppose that everything only exists so that we can eat and fulfill basic physical needs. A third of our lives are spent sleeping and two-thirds working on our heads, eventually dying, so that no one lives later. This is not in line with the law of conservation of energy in nature, nor with the logic of investing so much energy, effort, and creativity.

The magnitude and complexity of life and the universe generally lead to the conclusion that non-existence is not an option, that only existence exists and that this existence itself can become aware of this body. It is much more than cheese.

Looking at the stars, everyone will experience much more existence than our body. Furthermore, we know to a very limited extent what is going on inside this body, the brain remains a great mystery, and therefore we should not prematurely conclude that we do not exist after the death of the body. is.

It all comes down to the question of whether there is life before birth and after death of the body, it is a rebirth like this. It is a question if there is a soul that takes care of the body. And there is evidence of this.

Neurologist Karl Pribram claims that the brain is nothing more than an organ that receives consciousness. And it is based on solid scientific evidence. There is evidence experienced by many of you, but you were unable to identify it as such. We have everything or knowledge and observations that could not be made if consciousness were only in the brain and the brain. Many also have out-of-body experiences, have been tried and tested in universities, what I am writing is done by me and by many people.

Many scientific discoveries have been produced in this way, either unknowingly or otherwise, with the aim of proving that, and that has never happened as it does with research on consciousness, soul, and rebirth. In fact, all of the scientists who started soul and rebirth research to show that it did not exist ended up as the greatest proponent of rebirth, and claimed they did not “believe” it. They are, but now they know this is true.

Simply put, they have obtained solid scientific evidence. This is the case of Ian Stevenson, who intensively investigated over 3,000 reincarnation cases and documented them well in 12 books. The University of Virginia works today with the Department of Conceptual Studies. The investigation was also continued by Jim Tucker. Hypnotic regression is perhaps the most elaborate method to examine the evidence of reincarnation, I mean, there is evidence, because, after statements under hypnosis, researchers go to the field to verify the accuracy of the information found in hypnosis, as someone Scientific validation process in others.

The pioneer of such research, Dr. Helen Wamach, and she leaves with the intention of proving that rebirth does not exist. Viktor Zammit also begins his scientific discovery as a prosecutor of the Renaissance and advocates on his behalf. The most famous researcher is undoubtedly Drs. Michael is investigating Newton’s hypnotic regression. Furthermore, Drs. Gerald Netherton, dau. Arthur Guirdham, dau. There are other researchers like Varavara Ivanova, Peter Ramster, to name a few.

There is an important detail regarding rebirth, which explains why souls are reborn in the first place, or return to this world. All those who have clearly experienced the clinical death condition (NDE), as well as those who have undergone hypnotic regression and become aware of the condition between two lives, testify that they have completed their entire lives. Instantly he recalled life, every moment he experienced at once.

However, not only did he look back on what he had done, but he also saw how other people believed in their actions towards him. Everything we do to someone is seen from the point of view of both sides, both on our own and on the person’s side, how he / she considers our actions towards him / her.

That is why the soul itself decides to return to life where it can fully mature and improve. The soul decides for itself, nobody is forced to do it. This is the answer to part of the question that says “we will not remember anything”.

We will not only remember everything completely because nothing in existence can disappear, but we will remember things that we do not want to remember clearly. And we will rectify our mistakes again.

That is why we were born here, because of the memory of everything. So it is better for us not to sin here and now. We cannot run away from ourselves.

Therefore, before asking a question about the meaning of life and death, you should first examine what kind of research and evidence exists about it.

And there is evidence of this, not just past life hypnotherapy and the testimony of children. Their experiences are confirmed by biology as well as DNA research. That is, all rigorous scientific research demonstrates the principle of intelligent design according to which nature and life rest on higher consciousness, not on material causes and coincidences, this consciousness does not originate in matter, but vice versa, which we err Di “to talk to. “(And what quantum physics has shown doesn’t exist) comes from consciousness, from intelligent design.

Stephen Meyer: Signature in the Cell: DNA and Evidence for Intelligent Design can tell you about this work, as well as the work written by Nobel Prize winner Francis Crick: Life Itself: It’s Origin and Nature. You should trust him when he proves that DNA cannot be created in any way through evolution, but only through intelligent design.

The following is a simple proof of this statement. All life is based on the division of DNA, and DNA cannot divide on its own. This complex function is performed by proteins. However, the code for protein formation is in the DNA itself. Who came first; The hen or the egg? Apparently, both had to be created at the same time, designed by some higher consciousness.

All relevant scientific evidence shows that development does not exist and that all life is created by a higher intelligence. There is no valid evidence in support of Darwin’s development. Many animal species would not have a very possible form of breeding and rearing if they had evolved slowly. It was to be built at once, designed in its entirety, not through gradual development.

The point of all this is that the higher consciousness that creates life is what has been known since ancient times as the Divine Consciousness, the consciousness of God or our soul.

Yes, our soul is not a psyche, or an energy body in the body, which is created and disappears along with the body, but the soul is above and beyond our body, it is truly one of the divine. A small personal branch is the consciousness that creates and enables everything, the branch that creates our bodies and our lives.

This has always been the answer to the question: What is the meaning of life? The answer was never hidden. It was simply a matter of focus for one to see, and whether we were conscious enough to recognize the answer. To be aware of ourselves, we must be better people, more disciplined.

Nature has no reason to hide that answer from us. Rather, we are risking nature itself by not knowing the answer to this essential question. The more we identify with the body and the material, the more fearful and violent, negative towards life and disconnected from that life and the people we are. When we know the answer, we support all of nature’s life in all its forms, because then we are aware of the consciousness of our soul, and it is the same consciousness that allows the totality of nature and all of life.

Then, when we are able to understand and experience that soul consciousness in ourselves, we recognize it and feel comfortable in other people and in life, and therefore we cannot be negative towards them. Why don’t we know about it?

Because those who govern this world and our lives do not want us to realize this, they want us to work for this notion, informed consumers of our products and our corporations as slaves. They want us to live in fear and fight for our interests. They want us not to think with our own heads, but the way they suggest we do. They are the founders of all the universities and scientific institutions that tell you that there is no soul, that all life was created by collisions of random particles and that consciousness is a product of dead and unconscious matter. It is an insult to intelligence, but it works and dominates public opinion. This is what children are taught at school.