You are here: Home / Health - Immune System / What Causes of Magnesium Deficiency
Spread the love

What Causes of Magnesium Deficiency? 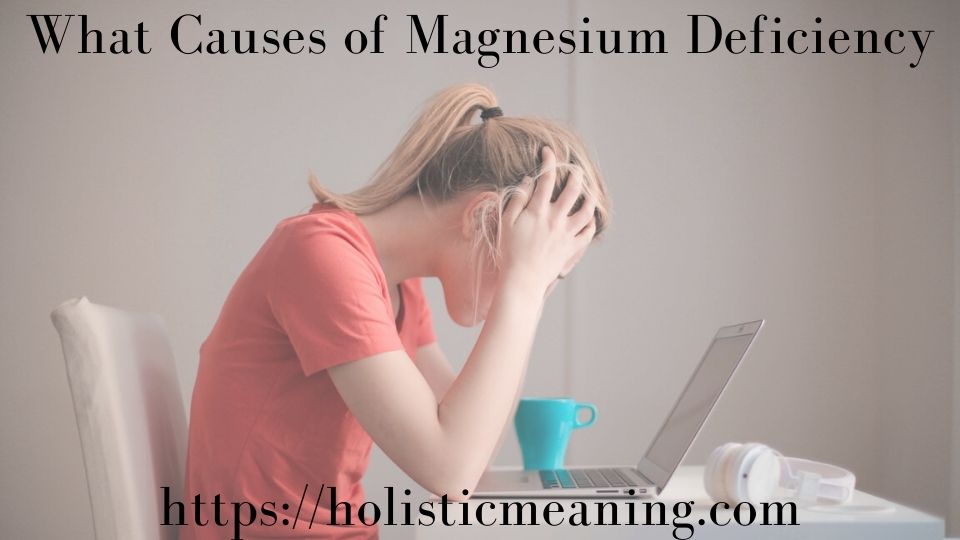 So if it’s got added sweetener, added sugar in it, understand that for every carbohydrate sugar that you eat to break down one molecule of sugar and running it through the proper biochemistry, there are eight different steps in that cycle. More than half of those steps actually require magnesium. And what happens when you eat processed sugar without magnesium? You remember sugar has no nutritional value.

There’s no magnesium in sugar. Your body has to find the magnesium from somewhere. So if you’re eating foods high in sugar, your body steals that magnesium from your own storage to process that sugar and try to convert it into energy. So sugar is hands down, in my experience, the number one cause of magnesium deficiency in the US.

What are some of the other causes of magnesium deficiency?

The second one is high stress. Stress Depletes magnesium. Now, I’m not talking about acute stress where you have a bad day. I’m talking about chronic, prolonged stress. It’s repetitive. It doesn’t go away. Maybe you hate your job. Maybe you’re in a bad relationship. Maybe you’re taking a really stressful class in college, like whatever that might be. If that stress goes chronic, you’re losing magnesium consistently. What else causes magnesium deficiency? Well, I’m going to say it. Coffee. There’s a rumour going around the internet that coffee’s really super rich in magnesium.

That’s not true. Coffee’s not that rich in magnesium at all, but it’s not really even necessarily the coffee directly, but it’s what’s in the coffee. Caffeine. Now I’m not talking about the person that drinks a six-ounce cup of coffee a day, but I’m talking about you. If you drive in through the Starbucks line or are you going into the McDonald’s and you’re picking up, you know these, you know 20-ounce cups, that’s not a cup of coffee by the way. That’s about three cups of coffee.

A Cup is six ounces. So one cup of coffee, the caffeine in that’s about a 100-120 milligrams of caffeine. You’ll be okay with that if that’s all you’re doing on a daily basis. But if you’re doing these 20 ouncers, these big jugs, if you’re drinking three, four cups a day, if you’re, if you’re the pot-a-day kind of person, the quantity of caffeine that you’re consuming, know that caffeine is a diuretic that depletes magnesium at higher doses. So if you’re taking in high quantities of coffee, again, large, bigger than six ounces, so greater than six ounces…

So many different medicines will cause this to happen, and ladies, for you, you should know one of the biggest, we’ll just write it in here are estrogen medicines, birth control pills or estrogen substitutes. So I’ll just put the big ones in. Hypertension, so blood pressure medicine, birth control pills, and then subsequently to that antacids. These are really the top three that will deplete the magnesium from your body over time. So, for example, it’s not if you took an antiacid last night, that’s not what I’m talking about. I’m talking about the chronic use of these medications over long periods of time. Over months they start to deplete.

Either they deplete the nutrient itself or they inhibit your body to be able to use the nutrient or they actually cause excessive excretion of that nutrient. So those are some of the different mechanisms, but very, very common to see medicine deplete magnesium over time. And we’ll talk a little bit in a minute. I’m going to draw you a picture because I really want you to see this.

Now there’s another thing that causes magnesium deficiency that many of you suffer from. And that goes back to inflammation of the gut. So if your gut’s broken, you’re not absorbing very well. And where does magnesium get absorbed? It gets absorbed in the small intestine.

So if your guts on fire, if you’ve got an irritable or inflammatory bowel disease like celiac disease, Crohn’s or ulcerative colitis or if you’ve got other kinds of nonspecific inflammatory diseases that you’ve been diagnosed with. Some people get a diagnosis of gastritis. Like what does that mean? It means inflammation of the stomach, esophagitis inflammation of the Esophagus, you know, some of these different terms. But if you’ve got inflammation in your GI tract and it’s hindering or affecting your body’s ability to digest and absorb nutrients from the food that you eat, then you are at risk for deficiency.

So, this is kind of the big list of different things that you want to know about if you’re doing them or things that you can change about your lifestyle or behaviour that might help you move in the right direction. Let’s switch gears here cause I want to give you really some food for thought tonight as it relates to number four. A lot of people don’t realize, I’m going to give you a couple of different scenarios.

Low Magnesium is known to cause your blood pressure to go up. It’s partly because magnesium regulates muscle tension. Now think about that for a minute. Your heart’s a muscle and so are your blood vessels and so if your blood vessels can’t properly dilate and contract and dilate and contract and they’re stuck kind of in a spastic or a spasmodic position, then it’s going to increase the tension or the pressure on the wall of the arteries and that’s what blood pressure elevations are. When we measure blood pressure, we’re actually measuring the pressure on the arterial wall.

What are we doing? What’s the scenario? What is the outcome? Are we winning this?

No. We’re losing. This is a losing battle. You’re not going to win here if this is the scenario, right? So you’ve got to figure out, you know, I always go back to what you know, functional medicine, which is root cause resolution. You’ve got to figure out why the blood pressure is elevated in the first place. You can’t just go after it with medicine and expect that medicine is somehow miraculously going to fix why your body is driving up your blood pressure in the first place.

Remember, elevations in blood pressure are a symptom of a deeper problem. They’re not the actual problem itself. They’re a symptom of the problem. Hey, and if you missed the earlier part of this series, click right here so you can go back and get caught up. The information there might be critical to helping you on your path to better health. And as always, thanks for tuning in and make sure you subscribe for updates below. Have a great day.