You are here: Home / Health - Disease Information / How Long Does Cocaine Stay in Urine?
Spread the love

How Long Does Cocaine Stay in Urine? 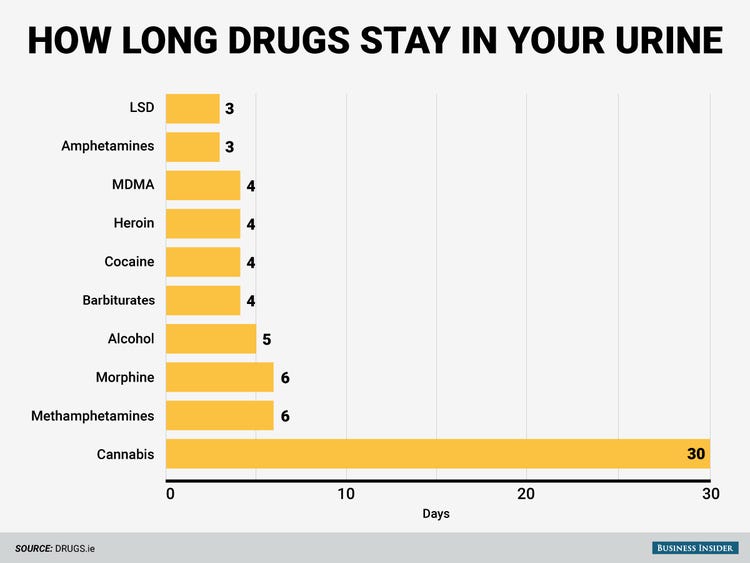 How Long Does Cocaine stay in Urine?
Cocaine is detectable in a urine test for Three to Four Days Approx.

How Long Does Cocaine Stay in the Blood?
A blood test will detect cocaine for One to Two Days Approx.

How Long Will Cocaine Show Up during a Saliva Test?
A saliva test will detect cocaine from One to Ten Days Approx.

How Long Does Cocaine Remain in Hair?
If it’s necessary to detect the history of substance abuse, hair is a perfect biological test material. A hair test will detect cocaine for up to Ninety Days.

How long does cocaine stay in your System?

This question is commonly asked by many who use this medication. Of course, there are many reasons why people ask.

Fear of being positive at work is one of the reasons. Also, people tend to be curious as to when this harmful medication will completely flush out of their system after they stop doing so. Also, some people may have legal reasons that require them to be drug free.

It is difficult to say precisely how long cocaine will remain in your system. We know, for example, that your urine can test positive for up to five days after your last use. However, many factors can affect the specific time period. Some of these reasons include age, metabolism, hydration level, body mass, amount, and duration of cocaine use.

In addition, the type of screening test performed will determine the length of the detection period. Detecting cocaine in urine, blood, saliva, or hair will have different detection windows. This duration can be as short as one day or as long as three months.

How long does cocaine stay in blood, saliva, urine, and hair?

Cocaine is one of the drugs found on most drug detection panels. If you use cocaine, it is likely to appear in most tests performed for work, legal purposes, or medical clinics. Of course, this will depend on several factors, including the last day of cocaine use.

Keep in mind, however, that the body rapidly breaks down cocaine. What this means is that cocaine itself is not detectable in most screening tests. What is detected on examination is a breakdown product of cocaine called benzoylecgonine. This chemical stays in the body much longer than the original cocaine.

Cocaine has a very short half-life of about one hour. Benzoylecgonine, on the other hand, has a half-life of approximately six hours. Ecgonine methyl ester is another metabolite of cocaine.

Hair: up to 90 days (but longer in heavy users)

According to some reports, a heavy user can test positive for urine for up to 2 weeks. The reason for this is because cocaine is stored in fatty tissues when people use it for a long time.

Although urine testing is still the standard, sweat patches are a convenient alternative. The reason for this is because they avoid some of the problems with drug testing, for example, privacy violations, possible disease transmission, and transport of body fluids.

If you are concerned about how long cocaine stays in your system, you had better stop doing it, especially considering the adverse effects of this drug. 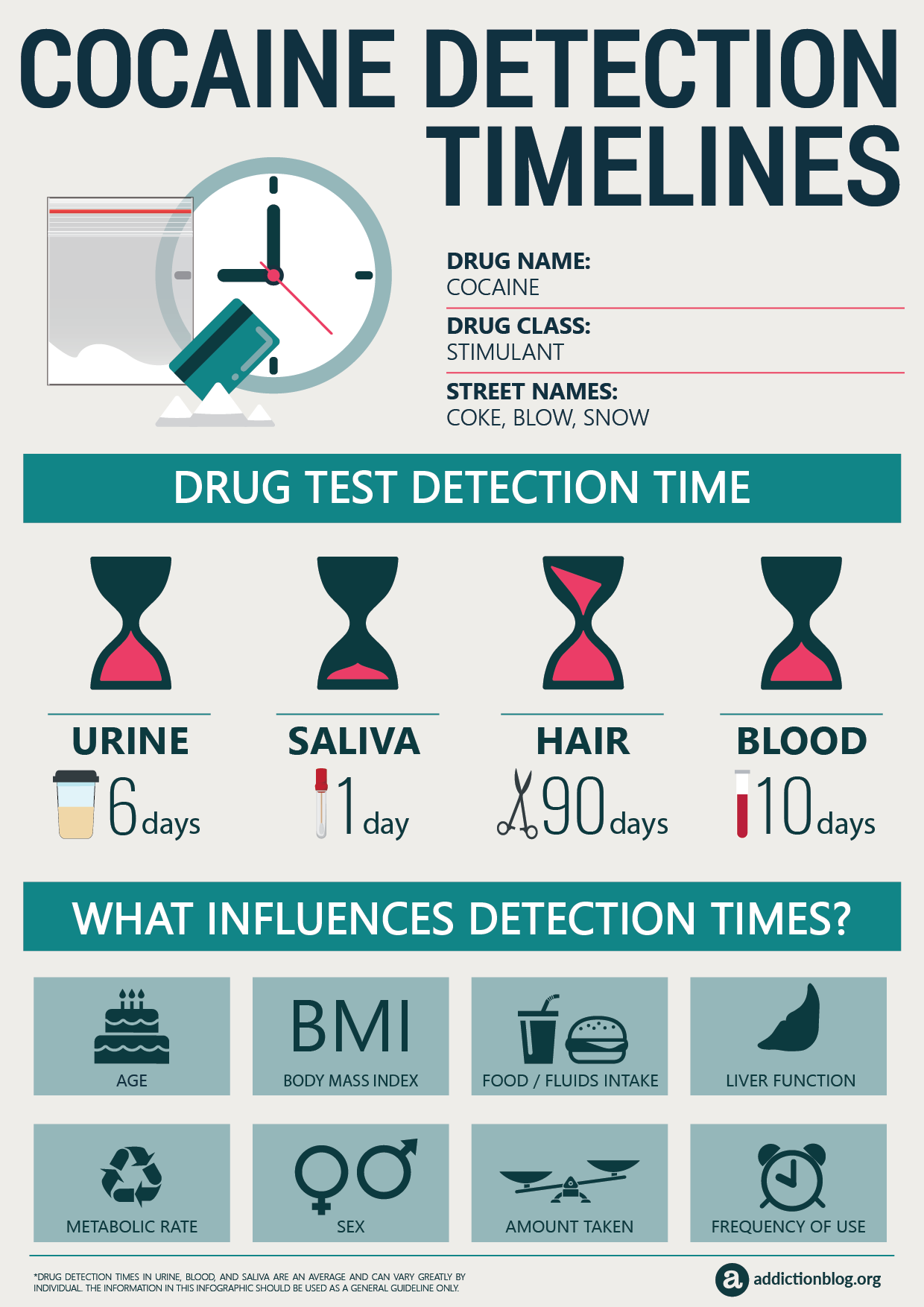 What factors affect the permanence of cocaine in your system?

Cocaine and alcohol
Many people who use cocaine also drink alcohol. So what is the effect of drinking while abusing cocaine? Does cocaine stay in your system longer when you drink? If it does!

Various problems can arise from the combination of these two substances. Some of them are:

Cocaine stays in the body longer when a person drinks alcohol.
Alcohol can increase cocaine levels in the blood by up to 30%.
Impairment from driving under the influence of alcohol is worse with ingestion of cocaine.
The combination of alcohol and cocaine causes an increase in heart rate.
Cocaine and alcohol within the body produce a dangerous chemical: cocaethylene. This substance has adverse effects on the heart.

Cocaine is a white powder obtained from coca leaves. Ingestion is generally by oral ingestion, smoking, inhalation, or injection. There are many street names for this medication. The common ones are:

How fast does cocaine work?

Due to its short half-life, some people may use cocaine many times in a short period to stay drugged. This excessive use is known as a binge. Unfortunately, this results in a crash. To avoid this blockage, people use it even more to counteract this effect.

Cocaine causes a flood of dopamine in the brain. The increase in this chemical causes the euphoria of this medicine. The effect of dopamine is also what subsequently leads to tolerance, dependency and addiction.

How long does cocaine stay in your system to cause poisoning? It is not the length of stay, but the dose of cocaine you ingest. Taking large doses of cocaine can lead to a high concentration in the blood. Consequently, cocaine poisoning can occur. Symptoms manifest as:

Cocaine poisoning is dangerous and sometimes even fatal.

To make matters worse, cocaine is sometimes cut with other substances. Therefore, other complications can arise from the use of such adulterated drugs. For this reason and others, it is vital to get professional help.

If you’ve been using cocaine for a while, you probably have some withdrawal symptoms when you stop. These may include the following:

There is no treatment with specific medications for cocaine addiction. On the other hand, drug-assisted treatment is beneficial for drugs like opioids and alcohol.

You may be concerned about how long cocaine remains in your system. Perhaps for testing positive at work, or for legal reasons. If this is the case, you may want to consider getting professional help.

There are many claims of ways to “flush” cocaine out of your system. Some of these examples include using detox pills, drinking excessive amounts of water, and taking some natural supplements. Despite these claims, none of them has a proven scientific basis. Therefore, it is not recommended that you try them.

Support groups are also beneficial. These groups offer accountability and guidance from their peers. In addition, the support of family and friends remains vital.

Self-medication with drugs, including cocaine, is quite common. As a result, it is essential to treat the underlying mental illness. Such disorders can include depression, anxiety, bipolar disorder, and post traumatic stress disorder.

You May also read:

How long does cocaine stay in urine test