You are here: Home / Health - Disease Information / Why Is My Sperm Watery and Clear?
Spread the love

Topic: Why Is My Sperm Watery and Clear?

Are you a guy who has watery semen, and are you thinking about the causes of that, its effects on fertility, and how to treat it? Don’t bother anymore because this informative article is for you.

The semen is the fluid released through the male urethra during ejaculation. It transports sperm and fluids from the prostate gland and other male reproductive organs.

Typically, semen is a thick, whitish liquid. However, various conditions can change the colour and consistency of semen.

Watery sperm may be a sign of low sperm count, indicating potential fertility problems. Ejaculation of thin, clear semen can also be a temporary condition without serious health problems.

Read on for more information on watery semen. 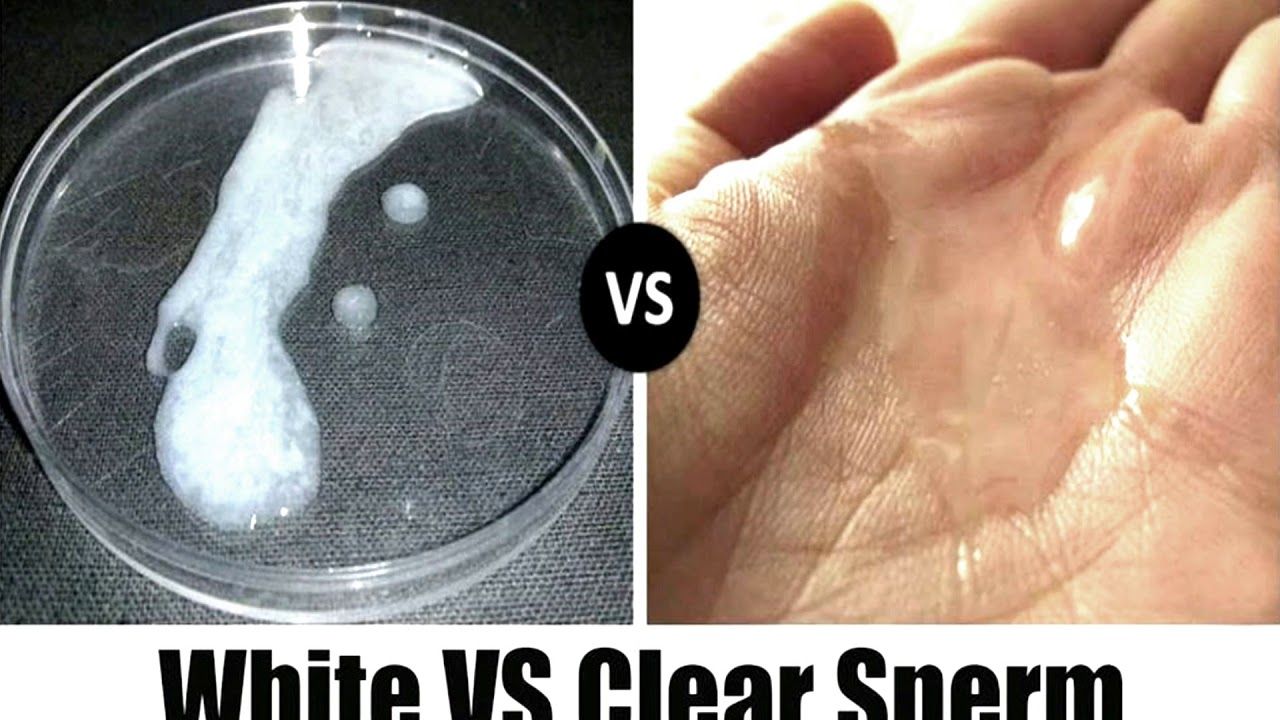 There are several possible causes of watery semen. Most are treatable or preventable.

One of the common leading causes of watery semen is low sperm count. This is also known as oligospermia. If you have a low sperm count, it means that your semen contains fewer sperm than average. A sperm count of less than 15 million sperm per millilitre of semen is considered below average.

Some causes of oligospermia include:

Varicocele: A varicocele is an inflammation of the veins of the testicles in the scrotum. It is a significant but treatable cause of male infertility.

Infection: Examples include a sexually transmitted disease such as gonorrhoea or another type of infection that causes inflammation of a reproductive organ, such as epididymitis.

Tumours: Malignant and benign tumours in the testicles can affect sperm production.

Hormonal imbalances: Hormones produced in the testicles, pituitary gland, and hypothalamus are necessary to provide healthy sperm counts. Changes in any of those hormones could affect sperm production.

Other potential causes of a coffee sperm count include:

If you have semen that looks watery, it is essential to note if there is any colour or if it is clear. Very clear semen can be a liquid before ejaculation that is released during foreplay. It usually contains some sperm.

Another possible explanation for watery sperm may be a deficiency disease. Research has shown that men who have adequate levels of zinc or men who are zinc deficient and take zinc sulphate supplements can better combat the consequences of anti-sperm antibodies.

These antibodies are produced by the immune system, which erroneously responds to sperm as a foreign body.

What Does It Mean To Have Discolored Semen? 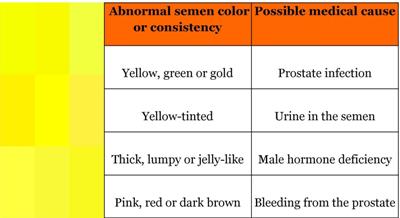 If you notice that your semen is discoloured, the colour may indicate a health problem.

Pink or reddish-brown could mean your prostate is swollen or bleeding, or there may be bleeding or inflammation in the seminal vesicles. The seminal vesicles are a pair of glands that help produce a significant liquid part of the semen. These are generally treatable conditions.

Yellowish green semen could mean you’ve got a prostate infection.

If you notice that your semen is constantly watery or discoloured, tell your primary care doctor or see a urologist. If you and your partner have been trying to conceive without success, see a fertility specialist.

One of the first tests that are done is a semen analysis. This does not usually control the health of your sperm and semen. The test will verify, among other things:

Other tests may be needed if your doctor suspects that there are problems with your hormone levels or the physical health of your testicles and neighbouring reproductive organs.

What are the treatment options? 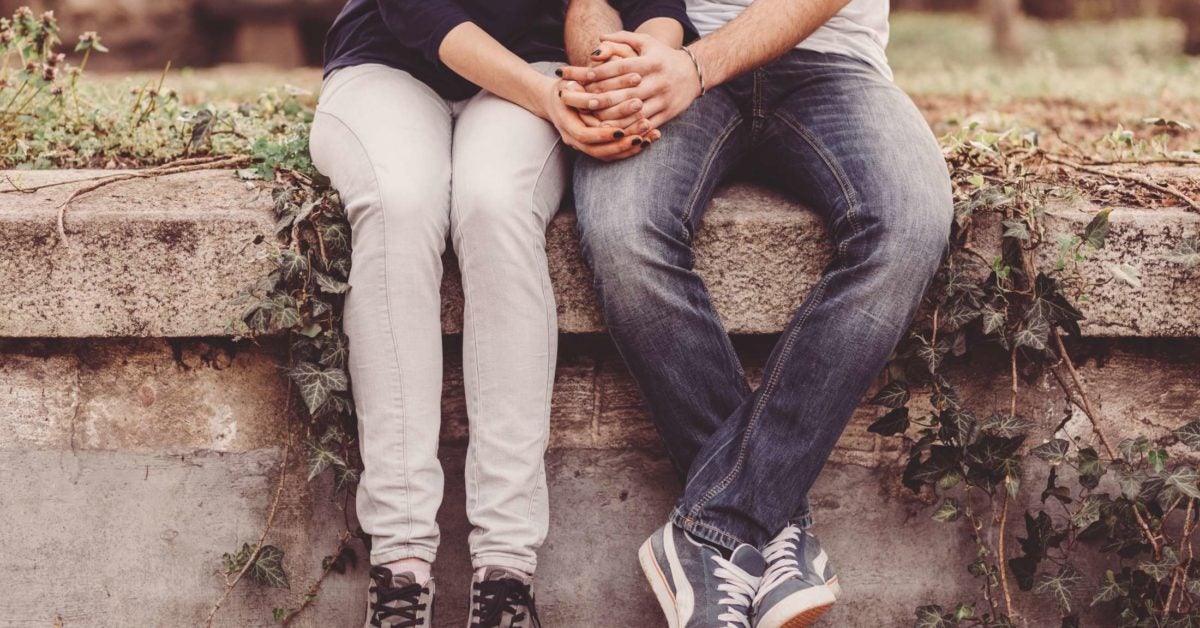 It may take additional attempts; otherwise, you may have something like an infection that has temporarily caused the low sperm count.

Treatment for the infection may include antibiotic therapy. Hormonal therapies may be recommended if a hormonal imbalance is determined to be the cause of your low sperm count. If a varicocele is discovered, surgery can usually treat it safely.

In some cases, a lifestyle change can help increase sperm count and improve the quality of your semen. Positive changes include:

Your doctor may also recommend that you refrain from having sex for some time to ejaculate less frequently. Doing this can help you see if the consistency of your semen changes.

Why Is My Semen Watery?

Semen is a mixture of sperm and other fluids produced by the prostate gland and Cowper’s gland. The semen leaves the body through the penis through a tube called the urethra. This can drain urine quickly as the urine bag can contract and forcefully send urine out.

This pre-ejaculatory fluid is produced by the prostate and Cowper’s gland, and the seminal vesicle. This is the same fluid that accompanies sperm when they ejaculate.

The volume of semen is NOT constant. It can change depending on the amount of desire, the amount of foreplay. Therefore for those children who have a good appetite and more extended foreplay, pre-ejaculatory fluid and secretions are higher, making your semen more voluminous.

When the semen has more volume, it will appear “watery”.

You cannot determine a person’s sperm production capacity simply by looking at its thickness or thinness.

A person who has sex after a long period of abstinence saw one or two weeks would discharge very early; hence, his semen is thicker and more dense with a yellowish colour.

Those who roll in the hay regularly have more whitish semen. The thickness can vary greatly.

In many cases, changes in the consistency of your semen are temporary and treatable. If the cause of the watery semen is a low sperm count and you are trying to conceive, there are many treatments available. Talk to a fertility specialist about the best options for you.

Before making important decisions, talk to your doctor, and perform the necessary tests to make a proper diagnosis.

How To Use Apple Cider Vinegar For Hemorrhoids

when is a 4th generation hiv test conclusive

What Is A Liver Fluke

What Causes Frequent Urination In Children